Garen Ewing: "I once covered a sheet in 20 versions of Lionheart's head" 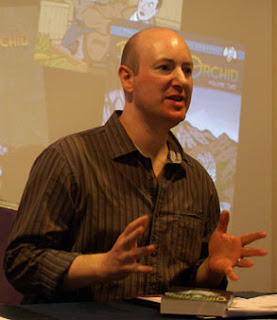 If you've ever wondered why Lionheart wears a trenchcoat whatever the season, why Dunning looks perpetually worried, or why Harry Crow sports a pipe, then Garen Ewing is the man to ask. The writer and artist behind the acclaimed comic book The Rainbow Orchid, Garen has drawn the cover illustrations for The Scarifyers since day one. As Nicholas Courtney once said, "It looks like Tintin!"
How did you decide upon the look of Lionheart and Dunning?
Drawing realistic likenesses isn't one of my strongest skills, but re-checking the original brief I see it was suggested the characters of Dunning and Lionheart just needed a slight resemblance – which definitely helped! So, really, it was dictated by Simon's instructions – Lionheart to look like an older, greyer, version of the Brigadier in a trenchcoat, and Dunning to resemble a professor in glasses and a tweed suit.
I think for the first Scarifyers story, The Nazad Conspiracy, I read the script before drawing the cover, but I'm not sure that I heard the actual recording until much later (and I loved it when I did). I think I heard the music first, in fact, and that was very inspiring for the right atmosphere – brilliant. For the more recent adventures I've just been given some of the main story elements and then I usually ask Simon a few annoying questions if any clarity is required! 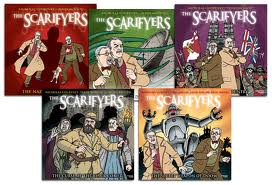 Do the characters get easier to draw as you go on?
Not really! I think Simon's become a bit pickier about their appearance – as he rightly should – perhaps due to knowing the actors personally, or maybe because he has a clearer view from afar, and that has kept me on my toes. Lionheart has been subject to quite a few re-drawings (once I covered a sheet in about 20 versions of his head to try and 'find him' – one of them looks more like Saddam Hussein than Nicholas Courtney). I've generally found Dunning easier, though I didn't quite get him right first time for The Magic Circle. It's all a bit subjective, but the most important thing is that Simon is happy with them – they're his characters. 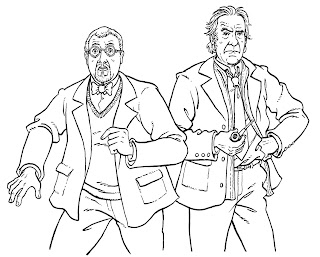 Do you have a favourite Scarifyers cover?
Usually, when I've just completed it, I think the finished drawing is terrible – purely because I'm too close to it and know every little line inside and out – it's the same with pretty much all of my work. But as the point of creation fades I start to think it's okay and then, eventually, I grow to like it. I'm used to that now, so don't mind the initial 'terrible' phase! There's something about every Scarifyers cover I like. If I had to pick one I think it would be a toss-up between For King and Country and The Devil of Denge Marsh. I might go with King and Country, for today anyway.
Do you have a favourite Scarifyers story?
You can count me in as a true fan of The Scarifyers and I really do like them all. I particularly enjoyed The Curse of the Black Comet, and The Secret Weapon of Doom was great too – they do get better and better. I haven't heard The Magic Circle yet. 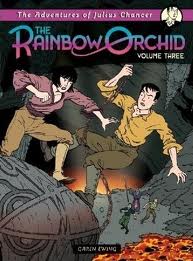 Listeners often comment that the covers look like Tintin. Please explain why!
I'm a big fan of Franco-Belgian bande dessinée, particularly those in the ligne claire (clear line) style, such as Hergé's Tintin, Jacobs' Blake and Mortimer, Chaland's Freddy Lombard etc. Quite a few years ago I decided to presumptuously add myself to that school of art, and so that's how I draw – it feels very much my 'home' style. I think The Scarifyers is probably a bit closer to Blake and Mortimer – it would make a great comic strip, actually!
For those who haven’t yet had the pleasure of reading The Rainbow Orchid, can you explain what it is? Where did the inspiration for it come from?
The Rainbow Orchid is a 1920s-set adventure story in the mould of the comics I've just mentioned, except it's British, of course. It's published in the UK by Egmont, who also publish Tintin, and it's basically the story of historical researcher Julius Chancer and his quest for a mythical and rare orchid in order to win a competition and save an ancient title and estate – mixed in with lots of other stuff to complicate matters.
I started it in the late 1990s when I realised I didn't want to work 'for hire' on other people's comics, characters and ideas, but wanted to put all that hard work (comics are hard work!) into my own thing, for my own enjoyment. So I scooped up all the things I loved – Franco-Belgian comics, classic lost world adventure (by the likes of H. Rider Haggard, Jules Verne, Arthur Conan Doyle, etc.), silent films, history, multi-threaded plots, and turn it into a comic. Comics at that time had become very dark and 'adult', and I wanted to write something that anyone could read, enjoyable for kids and adults alike – a great big adventure story.
What comics did you grow up reading? What were the biggest influences on you?
Asterix and Tintin were the mainstays of my childhood comic reading. The main influence I got from them was the meticulous attention to detail and the totally immersive environment, which is something I strive for now with The Rainbow Orchid. I loved the Euro-album format, and would search out anything like that. I was also obsessed with war comics and went through phases with 2000AD and superhero comics for a bit. In the early 1980s I subscribed to Warrior and discovered Alan Moore, another big influence, though perhaps less obviously so due to the style in which I draw. 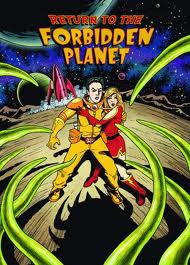 Your work features on a stamp, which is quite an honour. How did that happen?
I ask that question myself – how did that happen?! In 2005 I was commissioned to do the poster for the musical Return to the Forbidden Planet for the licensors, Josef Weinberger. Then in 2009, I think, I was approached by a design company who were putting together a stamp set of musical theatre posters for Royal Mail and they'd whittled it down to eight designs, including my Forbidden Planet one. It took a while but the stamps eventually came out in February of this year. A nice thing to have on my CV!
You’re an expert on the Second Anglo-Afghan War. Why?
I was researching my family history and discovered that two of my ggg-uncles served with the 72nd Highlanders in that campaign – one of them was the regimental piper and piped the Scots into Kandahar after the famous epic 300-mile march from Kabul to Kandahar. I got more and more fascinated by the whole thing and started a website for my research, writing articles and helping others with their research. Next thing I knew I was being invited onto BBC Radio 4's Making History with Sue Cook as their expert on the topic. I've got an enormous collection of material and really enjoy the research, though it's had to take a bit of a back-seat recently due to my comic work.
You started The Rainbow Orchid in 1997, and three volumes later it’s all coming to an end next year. How are going to cope?
Well, it doesn't quite end with volume three. Straight away after that I have to do a cover and get together some bonus material for the collected edition (out in October 2012) and then I'll look towards the next Julius Chancer adventure, which is pretty much all plotted and ready to go. I won't take 10 years to finish it this time (it'll just be a single volume for a start).

And finally, tell us something we don’t know about Garen Ewing...
I've been asked that question before and supplied the fact that I have no belly button. But as that amazing fact has been published and therefore is no longer an unknown, I'll have to think of something new... My first job was for Neil Gaiman's dad, packing vitamins in his health food shop – how's that?


You can find out more about Garen and The Rainbow Orchid at http://www.garenewing.co.uk/rainboworchid/
Posted by Cosmic Hobo at 11:10

For all things Scarifying